An article I wrote for the Independent this weekend. 2nd Nov 2014

My day on the streets as a Roma

‘Throw them in the river” and “Burn the cockroaches” were some of the messages left on the Waterford-based Facebook page Get Them Out Of Town, last week.

Aimed at the Roma community, the page which had 700 likes and has since been removed was created in response to recent increases in theft and crime in the local area. An angry mob sprang into action last weekend and 200 people gathered outside a large Roma family’s home, smashing windows and doors and frightening the people inside.

Three families, including toddlers and grandmothers, had to be evacuated while more demonstrations took place.

“It is everything you don’t want to see in the city,” said local Sinn Fein councillor John Hearne. “This sort of vigilantism has no place in Irish society,” said Minister for New Communities, Culture and Equality Aodhan O Riordain of the attacks.

He suggested that he would be “terrified” if he were a member of the Roma community living in Ireland at the moment, stating that those involved were “cowardly”.

With this in mind, I decided to try my hand at being a Roma myself, just to see how people react to me on the streets of Dublin. 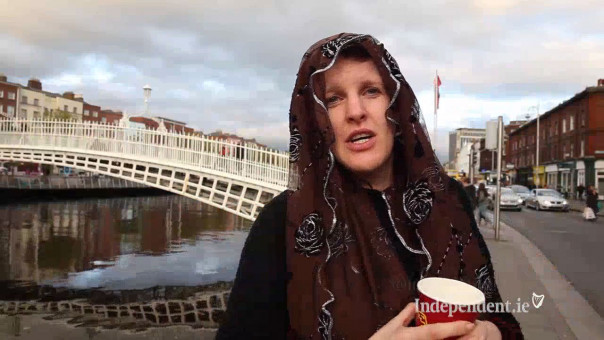 VIDEO: ‘You’re in a very vulnerable position when you’re on the ground with a cup in your hand’

I had no suitable clothing and at 6ft in height, fair- skinned and blue-eyed, I’m not particularly Roma-looking and thought I would be as conspicuous as a giraffe amongst a group of alpacas.

So firstly I asked a Roma lady on O’Connell Bridge where I could buy a skirt similar to hers. In return for nappies for the young child she carried on her arm she brought me to a clothes shop. She herself wasn’t allowed in. I felt bad for her and the baby, but she was used to it, saying she can’t go into most shops. When I asked her how old she was, she said she was 17. The child was at least one year old.

I bought a long skirt, a knitted black and red throw and a scarf, which I wrapped around my head making me look quite viable. I also acquired a cup and made my way to the Ha’penny Bridge where I met my friend with whom I’m currently filming a feature on homelessness.

It’s not something I would do alone, so she filmed me from a distance. As soon as I walked out of the pub I got changed in, I got strange looks. The pub owner suggested there was “some weird Muslim thing going on.”

I said: “No it’s a Roma ‘thing’.” He retorted: “Well then you better make sure you don’t get picked up and thrown in the back of a van and brought back to Romania.” Like many people he was of the opinion Romas or Romani are all Romanian gypsies.

Their origins are, in fact, in Northern India, from where they had to flee after invasions from other ethnic groups around 1,000 years ago. They have since dispersed, with concentrated populations in eastern and southern Europe.

There are said to be around 12 million Romani in the world. They came to Ireland in the early 19th Century originally to work as labourers. The collapse of Eastern borders saw many Romani arrive hidden in container lorries or freight containers. The admittance of an additional 15 states to the EU meant many more were trafficked into the country illegally, most of them seeking a better life. There are believed to be over 3,000 Romani in Ireland, though a precise figure is not available.

I bent down as far as I could and made my way to the highest point on the bridge, where I found a place to sit. I kept my eyes to the ground out of fear of people talking to me. I felt really sorry for the person I was pretending to be. Though I’m never above any kind of work, I did feel shame, which was exacerbated after the first person put money in my cup. I felt terrible – overwhelmingly for the fact that I wasn’t genuine and also because there is no nobility in earning money by begging and surely people would rather do something else for a living than this, no matter what their background.

Any insecurity I had about not looking the part disappeared when a homeless guy asked me to move. “There’s someone on the other side and I’m here. That’s three. There’s too many of us.” I just nodded. “Oi, are you listening to me?”

Yes, I heard you, I thought. I was at my most vulnerable then. I didn’t want to invade anyone’s patch. I doubt it would have led to anything much bar a few harsh words, but still I decided that moving would probably be for the best.

I got up and wandered over to another spot nearby, making sure I wasn’t in anyone’s way. More than ever, I also became aware of how many homeless are on the streets of Dublin. As soon as I sat down, two homeless guys started trying to get my attention. I said nothing. I have been working a lot with homeless people lately and have a great understanding with many of them, not normally seeing them as a threat, but in this case I was somewhat lower down in the pecking order.

As a Romani in Dublin, you are either completely ignored or asked to move along. It’s no news to them to be treated poorly. It has defined their existence throughout history.

They were expelled or enslaved, sentenced to torture and death, segregated and discriminated against pretty much ever since they were brought to Europe from northwestern India and Pakistan. They never identified themselves with a territory. They don’t have a distant homeland or any rights to national sovereignty anywhere. The world’s true travellers, on the fringes of society, they are a cultural enigma to the rest of the conforming, technologically-savvy world.

In many cases they don’t own anything like social security numbers or credit cards. Up until the 19th Century, they didn’t even own their own language, as it was forbidden in many countries. In the 20th Century, Hitler deemed the Romani as subhuman, inferior undesirable beings or ‘untermenschen,’ and up to 1.5 million lost their lives during the war. They were directly targeted for genocide and many ended up in the gas chambers of annihilation camps like Auschwitz. Unlike the Jews, the Roma community never received reparation.

Some 44pc of the German population believe that Roma have a tendency to criminal conduct, many stating that they leave an unholy mess everywhere they go and partake in aggressive begging and theft. They are still the subject of discrimination and recently a French mayor narrowly avoided jail after claiming that Hitler didn’t kill enough Romani people. In 2010, French authorities demolished 50 illegal Roma camps in order to repatriate them elsewhere.

I felt like quite the ‘untermensch’ when I had to leave my second spot to make my way to Capel Street Bridge. There was already a Roma sitting on the other side, but not wanting to be frightened into submission, I took a seat to see what would happen. She looked at me strangely as we made brief eye contact.

I knew that I was sitting on the wrong spot again, when a man from Eastern Europe came up to me and asked how much longer will I be there. I said five minutes. He was shocked. “Five minutes? Really?”

He had a cardboard box with him and looked somewhat peeved. It was the wrong thing to say. Clearly I needed to brush up on my begging etiquette. The situation raised alarm with an Irish homeless person, who made his way towards me. I looked up from my veil afraid of what they’d say. “What are you doing here?” were the last words I heard before I scuffled off.

I was told by a homeless friend that they don’t have anything to do with the Roma. “I don’t know where they come from but there are loads of them. They get picked up in the morning and brought in and then spend the day begging and then they get picked up again. I often have one sitting on my spot when I get in in the morning. Lots of them are people trafficked.”

Traditional Roma society still arranges marriages between minors as young as 12, some of whom are traded between communities. There are allegations of child trafficking and sexual exploitation, but many reports suggest figures are grossly exaggerated.

Clearly the underdog and very much clueless about where I should sit, I tried the Ha’penny Bridge again. “There’s not enough room for the three of us,” the homeless guy to the right kept shouting, so I decided to call it a day.

Despite the fact that they influenced jazz, bolero, flamenco, classical, house and techno and they have inspired a gypsy fashion movement, it came as no surprise that Romani are at the bottom of the social pile – Europe’s most persecuted minority. For most people they are pests who sit under a cash machine giving you a forlorn look while you wearily withdraw money.

As the Roma aren’t homeless, I’ve often chosen to give money and food to Irish homeless people sleeping on the streets. My social experiment has made me a little more aware of the Romani plight and how difficult it is to get up each day and beg an irritated public for money.

Whenever we complain about them we should ask ourselves, how else are these people meant to earn money? Who would hire them? When you see the world from its lowest place you feel more compassion for the people who are there, day in, day out. I gave my earnings – a grand total of €4.21 to two Roma before I went home – luckily back in my own clothes.