Link to article in The Sunday Times here

As a member of the mid 40s age cohort, I’ve reached the ‘overworked overweight, beyond adventure’ chapter in life.

Bogged down by the unrelenting daily grind, some mid-life folk have yielded to the illusion of fear with it’s presumed limitations, in favour of fun things like spontaneity and stimulation.

These days, I get more excited buying a new bin, than going out. After all, hangovers last for a week now, and I have less time to waste.

But by retiring from socialising at night, my adventurous life by day is experiencing a renaissance. In fact, my frontal lobe, which hosts dopaminergic pathways, associated with reward and motivation is gearing up a notch.

With adventure in mind, I head to the Alps.

The destination – Saas Fee, a resort village in Switzerland’s Valais region, close to the Italian border, some 1800 meters above sea level. Dwarfed by 4000 meter peaks, it is known as ‘The Pearl of the Alps.’

I, like many Wham disciples of my generation, first came across the name Saas Fee in the 1980s when it featured in the band’s famous ‘Last Christmas’ video, which has been viewed over 600 million times on Youtube, despite cringeworthy sartorial choices and dubious hairstyles.

Unlike other Alpine nations the Swiss kept their ski lifts open during the locked-down Covid-19 winter and enjoyed the best snow in 20 years with the slopes to themselves. At home in Ireland I had felt like Hans Christian Andersen’s Little Match Girl watching from afar.

Like anywhere in chocolate-box Switzerland, it is easily reachable: first by train, which I take from Zurich airport to Visp via Berne and Lake Thun, then by bus through high Alpine passes. After that it’s a short walk to the Sunstar Hotel Saas-Fee in the village, my base for four nights.

Morning one starts early with a round of skiing. Lifts open at 7am and we can ski until lunchtime, when the snow turns slushy. The lifts to the Mittelallalin station, 3,500m above sea level, are packed with Olympic and Paralympic teams from around the world, training for the Winter Olympics in Beijing 2022. With no time to waste I enjoy the fantastic conditions, plentiful snow and post-piste pint at the revolving Mittelallalin station.

But skiing isn’t my main objective this year: the Allalinhorn, my first 4,000er peak (it measures exactly 4,027m), is to be climbed. I’ve wanted to climb the 4,000ers in the Alps ever since I learnt that the Swiss mountaineer Ueli Steck (who died during an expedition on Nuptse in the Himalayas in 2017) climbed all 82 of them in just 62 days. This “piqued” my interest: could I climb a 4,000er or more despite not being the “Swiss Machine” elite mountaineer that Steck was?

As luck would have it there are a number of 4,000ers requiring little or no mountaineering experience as long as you have the right fitness level, the right gear and, importantly, the right guide. Allalinhorn is graded F+, which stands for “facile”, but there’s still plenty of opportunity to underestimate the weather and the terrain. 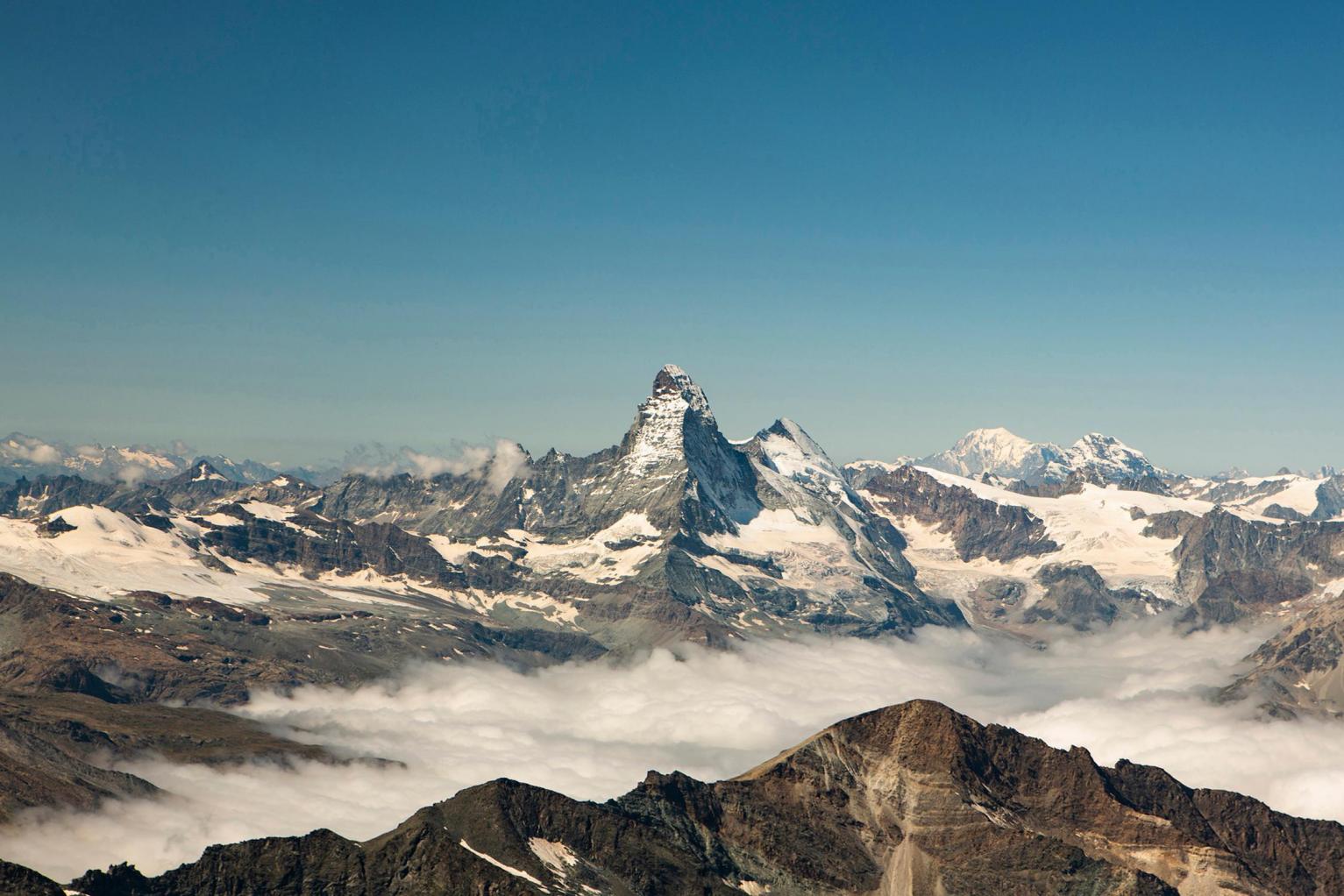 View of the Matterhorn and Mont Blanc from Allalinhorn, Saas Fee
BARBARA MCCARTHY

I join a group led by a female guide, Elsie Trichot Lemordant, and participate in a portion of an ambitious 48-peak challenge to raise awareness of the lack of female guides in Switzerland, where they make up just 3 per cent.

“That’s not enough — 3 per cent women. No,” Trichot Lemordant says, shaking her head. She proves that mountaineering is not male-only terrain and impresses with her sheer power and skill, quiet calm and intuitive knowledge of the terrain and the people she leads on it. At the time of writing, female teams had ascended 47 of the 48 in the Swiss Alps, with only the Taeschorn remaining.

We meet at the lift station and get the ski lift up to Mittelallalin. Forty-five minutes later we put on our crampons to begin the 500m ascent along the ski line. I have hired mountaineering boots and crampons but I have my own pole and gloves. We soon rope up in two groups of four and walk briskly. Roping together facilitates a rescue in the event of a crevasse fall while protecting you on steep slopes and ridge traverses.

About two thirds of the way along we arrive at Feejoch, a plateau where Mont Blanc, the Matterhorn, Monte Rosa and other famous giants come into view. I spend a moment taking in the vista, thankful to be alive. It is spectacular. At this point we are only a short 35-minute hike from the top. The last bit is rocky, made more difficult with climbers coming down the mountain. Then a final ridge, which would have frightened the life out of me as a child, is the only thing between me and the summit cross. I won’t let acrophobia stop me. After all, “You are not afraid of heights; you are afraid of falling,” as the mountain saying goes. 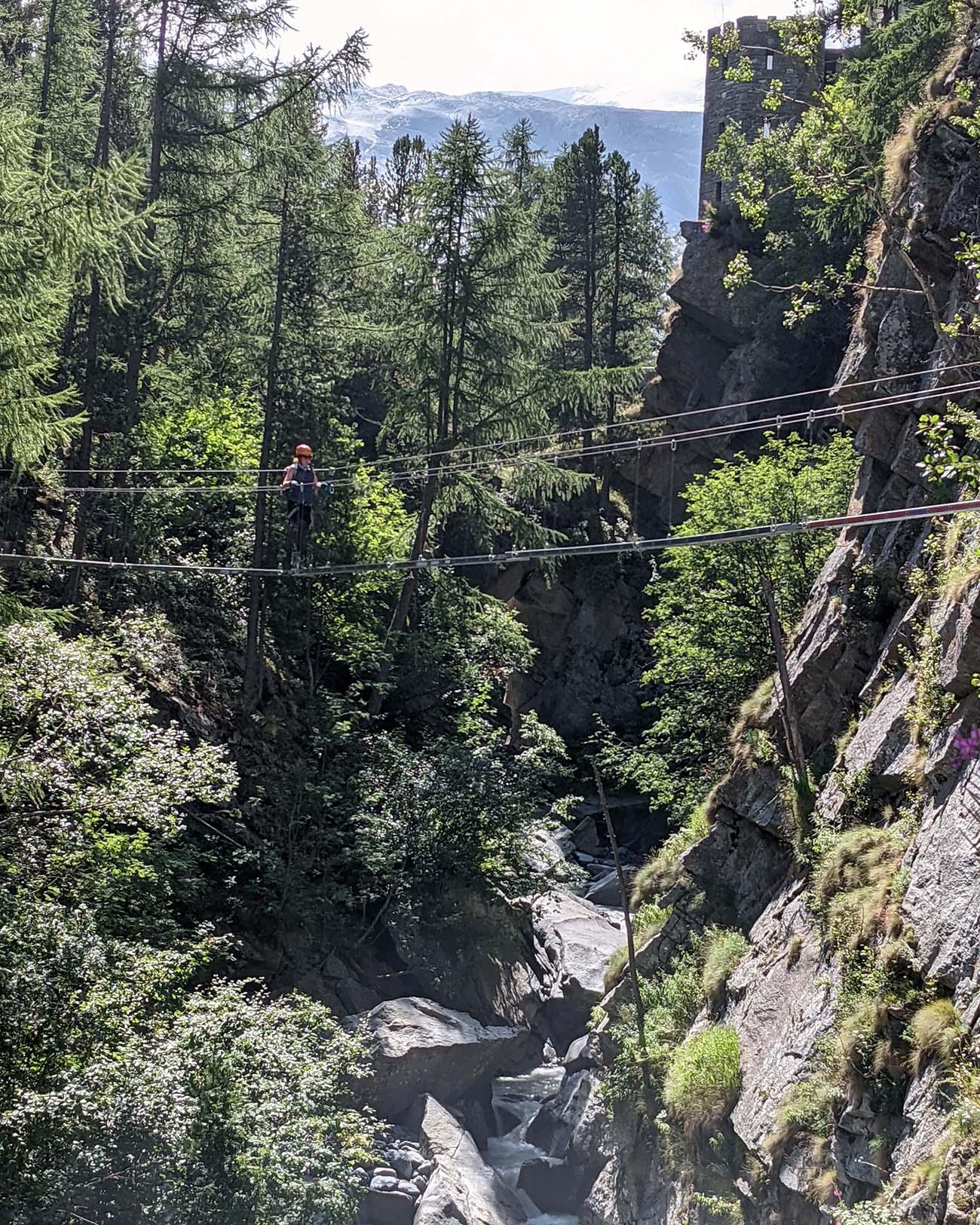 Via ferratas can be found all across the Alps, offering ladders, abseiling, rock climbing, scrambling and zip lining with different levels of challeng
BARBARA MCCARTHY

The summit experience and the breathtaking views are a high point of the trip. Obligatory summit photos with my team follow before the descent, which can be hard on the knees, but we chat away, so the walk down feels easy — bar a last dash in the sunshine to the Mittelallalin station, when my legs begin to feel heavy. I had brought as little stuff to carry as possible, but a waterproof rain jacket, waterproof climbing gloves and decent hiking pants are a must for hot or cold days.

The five-hour task was complete. I go for a swim at the stunning Aqua Allalin pool, admiring my loot, the Allalinhorn, framed through the giant window. A stunning three-course meal and a spot of yodelling follows at the hotel.

Whenever Alpinists and rock climbers descend on Europe, they are always amazed at the incredible climbing, such as the Eiger North Face, while never being too far from fondue and local schnapps. The food in Saas-Fee is ubiquitously exquisite. I particularly enjoy my bucket of bubbling cheese at the Arvu Stuba restaurant, thrilled to be doing lots of sports to burn it off.

The via ferrata at nearby Gorge-Alpine — a must for adventure lovers in winter and summer — was the plan for the next day. In a recent social media post the free soloist Alex Honnold, who ascended the 2,307m El Capitan in Yosemite National Park in 2017 without a rope, said: “I kind of love via ferratas; the position and experience of soloing with very little of the risk. They’re incredible ways to play in the mountains.” 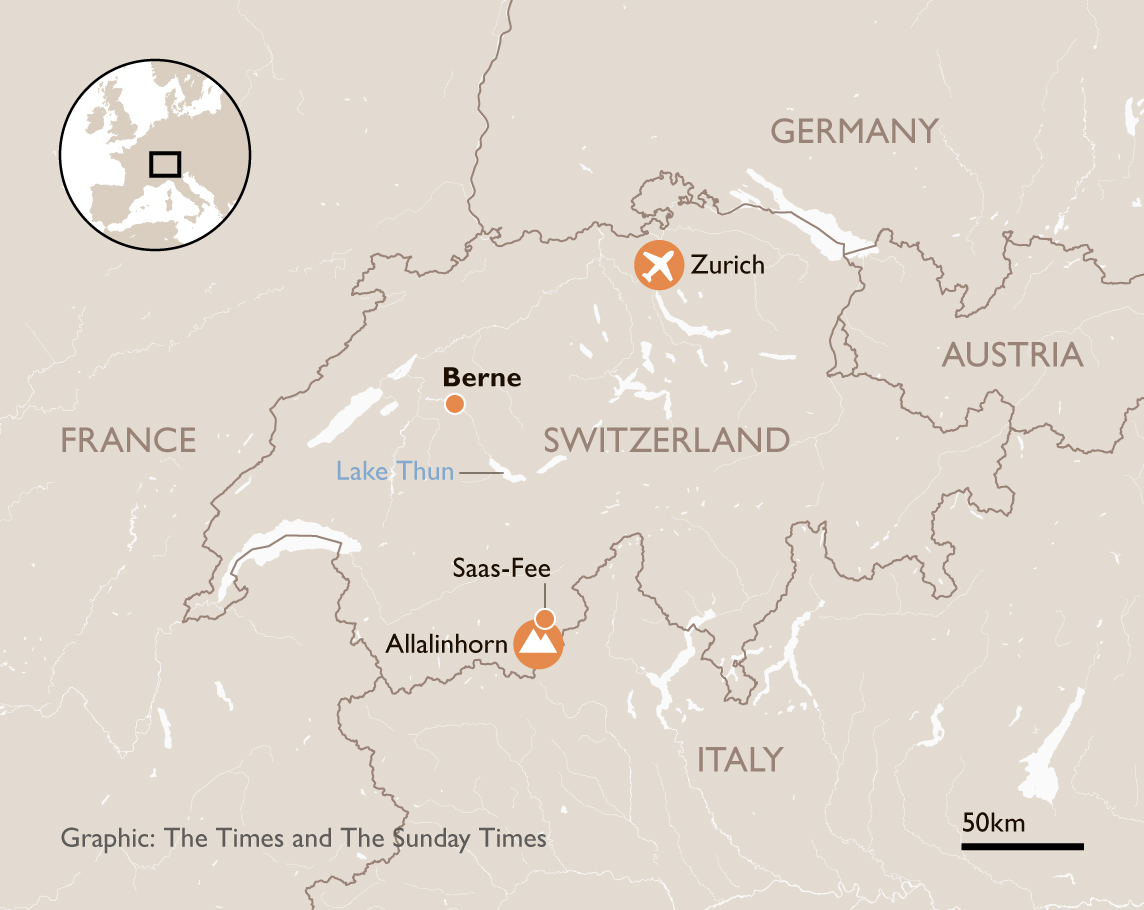 A via ferrata, Latin for “iron way”, offers everything a mountain adventurer needs, such as ladders, abseiling, rock climbing, scrambling and zip lining (not quite the type you get in children’s playgrounds). You can find them across the Alps, some benign, some hardcore.

You get kitted up with a harness and helmet then you climb up beside a wire and slide the carabiners along it as you move. The wire is bolted into the mountain at regular intervals, so you keep having to clip on and off while walking along ladders and iron steps.

It sounds complicated but the guides show how it’s done. Whatever you do don’t unclip both carabiners at the same time, leaving you exposed and embarrassed in front of your guide. Then again, mortification in front of extremely experienced mountain guides is inevitable — I still get cold sweats thinking of the time I put crampons on the wrong way round in Chamonix last summer.

If you are planning on doing a via ferrata, you can’t really stop along the way, so be careful what you wear. My choice of thick trail pants was wrong; I boiled because of it. Nonetheless, it is terrific fun, with fondue after. Ah, fondue. Sports with added luxury may be why this place is so popular with my frontal lobe.

After my adventures my night’s sleep was good, my legs were sore but my lungs were filled with fresh air. I’d happily return to Saas-Fee and the Valais every year, bringing my daughter next. She’d love it too. Switzerland may be twee but don’t be fooled: it’s a beast and it accommodates everyone from the skydiver, base jumper and paraglider to the city slicker, fondue eater, child, teenager, trainspotter and, most importantly, the exhausted mid-forties cohort who just want a bit of adventure followed by a cosy bed.

Getting there
Fly from Dublin to Zurich with Swiss from €135 return; swiss.com

Getting around
The Swiss Pass gives unlimited travel on fixed consecutive days by train, bus, boat and within cities. Three, four, eight and 15-day passes are available. From €217; swiss-pass.ch

Where to stay
The Sunstar Hotel Saas-Fee (doubles from €145; saasfee.sunstar.ch).

Skiing and climbing
Ski passes are €75 per day; the via ferrata costs from €85pp. Mountain guide fees depend on the size of your group (see intothemountains.com). The “100% Women Peak Challenge” runs until Oct 8; peakchallenge. myswitzerland. com/en. Covid vaccination certificates are required — bring a printout as well as the digital copy in case your phone dies, as waiting times can be severely extended if travellers don’t have all the documents.

Why your profile photo matters