When someone tells you “a five-year-old can do it”, there is generally no need for concern. When I watch a video clip of my excellent guide’s young son climbing the Sturrall headland, however, I get hot flashes and sweaty palms.

Sandwiched between the village of Glencolmcille and An Port, at the southern end of Donegal’s stunning 1,134km coastline, the 180-metre (590ft) high Sturrall is rugged and foreboding.

The protruding cape was first scaled by the British climber Walter Parry Haskett Smith in about 1890. The old Etonian and Oxford law graduate, who is considered the father of rock climbing, accessed the narrow summit via a 400-metre long exposed skyline ridge from the landward side.

A trailblazer during the great age of British mountaineering and discovery, Haskett Smith eschewed ropes and spikes as he conquered unclimbed cliffs along the coasts of Britain and Ireland.

About 122 years later, in 2012, climbers Iain Miller (my aforementioned guide), Theresa Hughes and Aaron Entringer ascended the headland via a steep scramble down the north spur and a walk along a knife-edge ridge. This is the route I was going to take, and one that Miller insists is easy — though, unlike Haskett Smith, I am going to use some rope.

I begin my journey in Glencolmcille. The village is about 4½ hours’ drive from Dublin and close to the imposing Slieve League, which I hike up later that day. Donegal weather is unpredictable, but when Miller picks me up at 4am from the Hideaway B&B for a short drive to a parking spot, the conditions are perfect — no golden glow, but no rain, either, and some stunning views. As someone who suffers from acrophobia, space and motion discomfort, and some hypochondria thrown in for good measure, I spent the previous evening struggling with hypothetical scenarios. “Only a small percentage of mountaineers have accidents. Sadly, you only read about those who do,” says Miller, who has a wonderful knack of putting you at ease. “It’s all about the guide.” 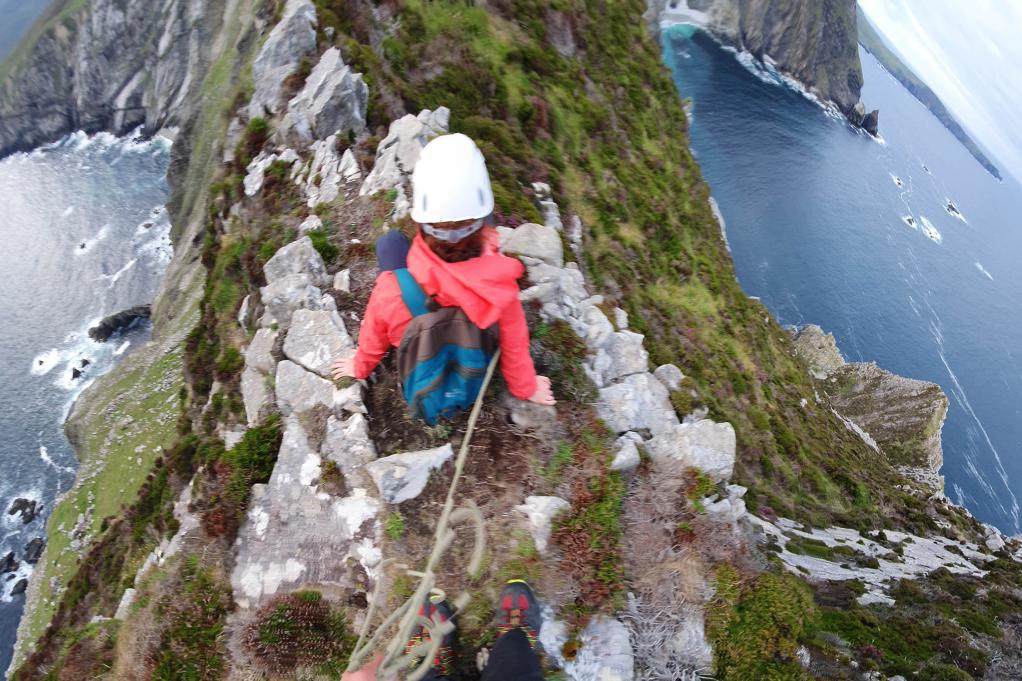 When I tell him that I considered giving up halfway and calling the coast guard, Miller says, jokingly, that he will order some coffee while we wait. So we hike the 3km to the cliff from the car, chatting and laughing.

The founder of Unique Ascent has an impressive CV. Born in Scotland, Miller’s love of mountains and the sea are intertwined. His career as a sailor took him around the world, while back on dryish land, he ascended rocks and previously unclimbed sea stacks.

After 30 years of mountaineering, mostly in Donegal and Scotland, Miller is a fully qualified mountain instructor. His company offers bespoke courses in rock climbing and hill walking, sea stack ascents, mountaineering, sea kayaking and abseiling, and much more. So, no Alps or Karakorams then?

“No, I focus on sea stacks and the coast; first in Orkney, in Scotland, and since 2007 in Donegal,” he says.

Incidentally, sea stacks are the craggy free-standing pillars of rock you see dotted along Donegal’s stunning coastline. They exist in such numbers only in Scotland and Tasmania.

“We get to the base of sea stacks by kayak and then climb them before the tide comes in,” Miller says. “En route, you can see some great wildlife. There are variables, like weather, wind and waves, but when it works out, it’s the best adventure you can have, especially if it happens at sunrise or sunset.”

It is obvious that Miller loves his day job. He explains that many of his clients are from overseas and have a terminal illness. They want to do something amazing, such as climb a sea stack.

“It’s great to do something that scares you once in a while,” he adds. 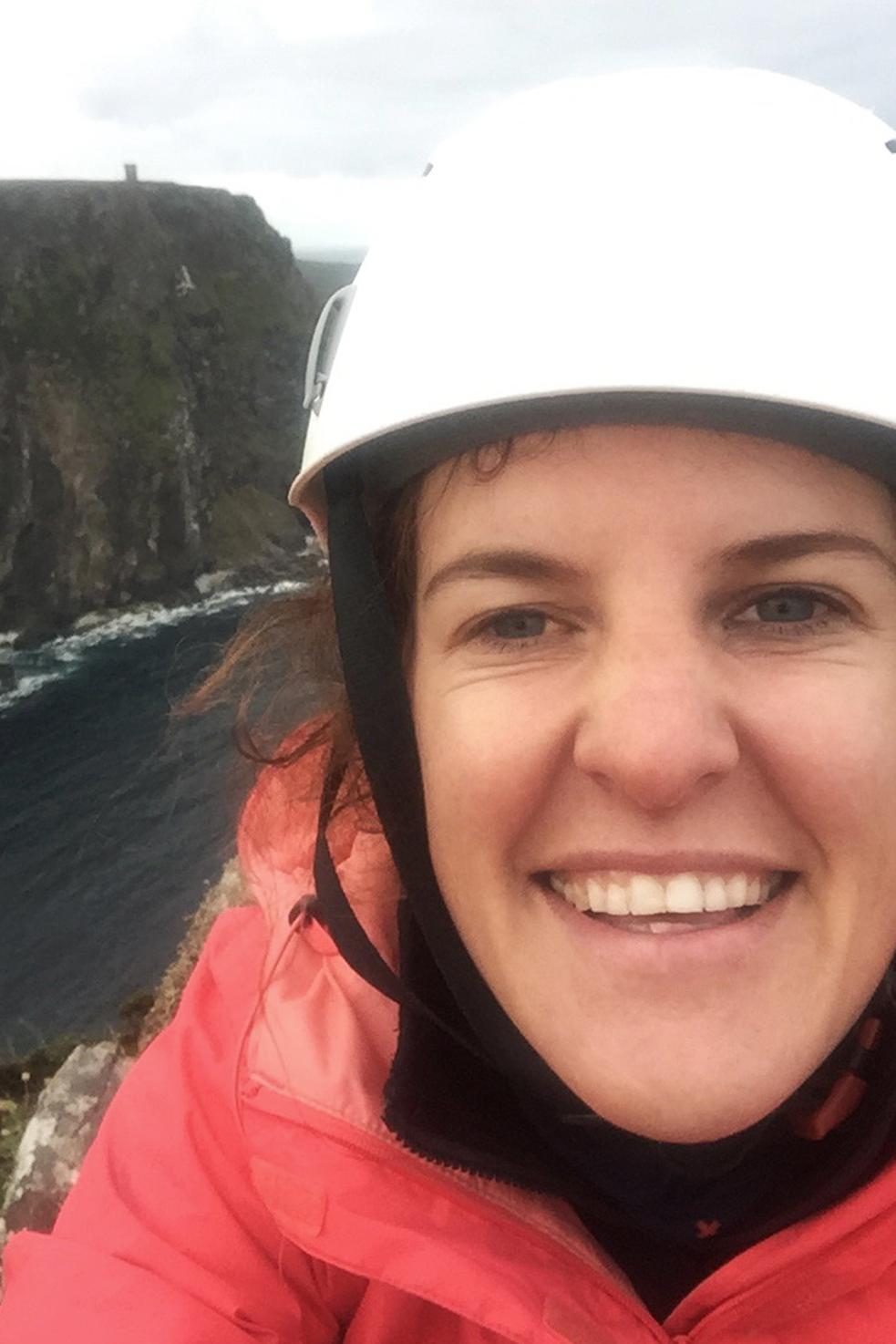 Only about 25-35 people climb the Sturrall each year, and somewhere between 150 and 200 climbers have stood on the summit — most of them with Miller. We walk along the headland, past sheep, and I try not to look down.

“I was scared sitting in the gods during a performance of The Pirates of Penzance in the Olympia in 1981,” I say.

Despite my trepidation, I like to embrace my fears. Through the years, rather than avoid new experiences, I am drawn to outdoor adventures such as skydiving, back-country skiing, hiking, bungee jumping — and running off a cliff tied to a rail. As television adventurer Bear Grylls says: “Being brave isn’t an absence of fear. Being brave is having that fear, but finding a way through.”

“Fear is merely a perception,” says Miller, as we soldier on to the exposed, rugged cliff that could not be anywhere else but Ireland. “You need to dig your feet in and get a firm grip,” he says, while checking the route, with his hands in his pockets. All the action is at your feet, and walking like you are on a tightrope, with your arms and hands flapping, will make you unsteady.

We stop to take a few photos and once we come to what Miller calls “steps”, he attaches himself to me with a rope. “The rope won’t stop you from falling — if you fall, then I fall — but I can help you if you trip.” He ties a knot and climbs up the natural rock steps, where the rope is secured. He asks me to climb up, too, and I try to follow his advice and use my feet, rather than cling on to shrubs and rocks with my hands. I feel a slight tug and then I’m up — almost at the summit after a bit of a scramble.

The last part of the climb is the bit I feared most. The ridge has vertical drops on either side, but it’s awe-inspiring. Some parts are no more than a metre wide, and fear makes me kneel down for comfort. I manage to steel myself, however, and walk the rest of the way to the summit . . . tentatively. It’s a great feeling to overcome my fears.

It is not even 6am and I’ve climbed the Sturrall. It’s so exhilarating, and I sit down in case I accidentally fall over. The conditions are perfect and the views are breathtaking. I am thoroughly enjoying myself and feeling lucky to be there, when everyone else is still fast asleep. We spend a little time at the top and it is all lighthearted.

While I am sitting on the summit, I contemplate the thought that I could have brought my five-year-old on the climb — that is how much I trust Miller.

“When he did it, my son just wanted the chocolate cake at the summit. That’s what propelled him to go,” he says. I thought of my daughter, who would be the same — chocolate cake first.

As we descend, I get a great buzz, as you do in these situations. As a fan of early-morning hikes, this was one of my most memorable.

The best part is, because it is so early and it is summer, I have the rest of the day ahead of me. Breakfast, tea and a nap follow, then I am off to Slieve League for the awe-inspiring views.

Donegal is a great staycation destination. I will go back to climb Errigal or a sea stack with Miller, or perhaps another protruding rock, now that I am buoyed by confidence. The trip to the Sturrall, especially during Covid times, is invigorating and adventurous. Looking back, I had nothing to worry about. 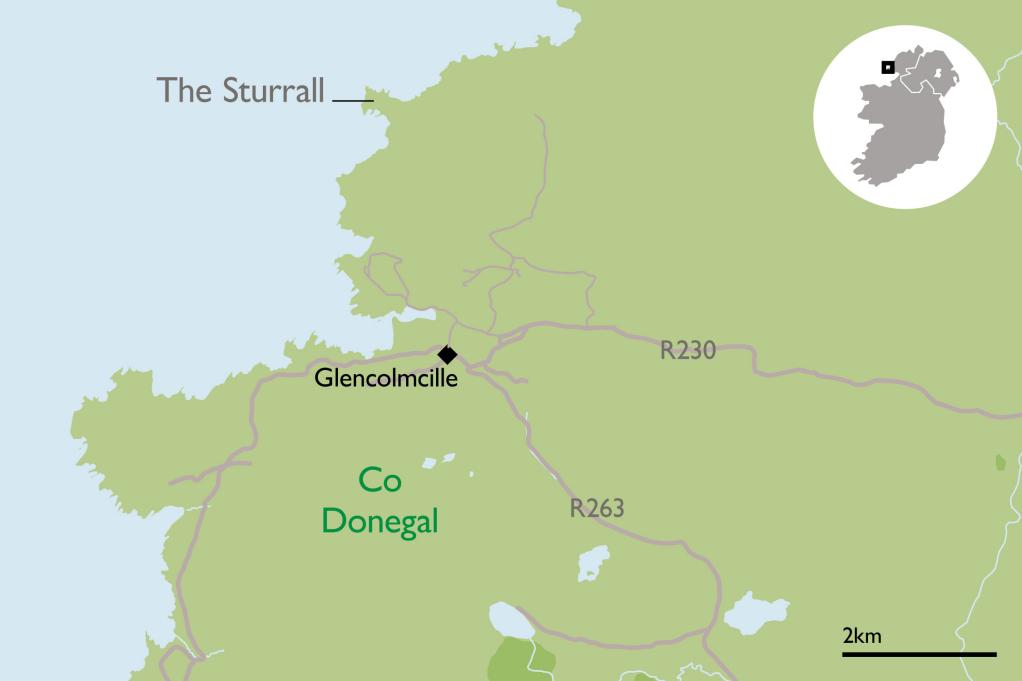 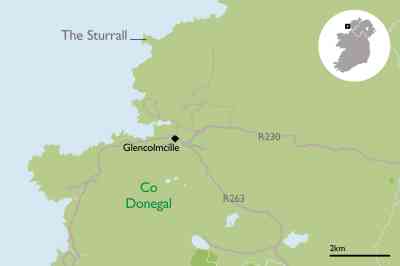 Dimensions: About 800 metres long and 180 metres high at its steepest point
Location: Between the village of Glencolmcille and An Port, at the southern end of Donegal’s coastline
Grade: XS 4C
Access difficulty: Tetchy
Access: Small path, followed by a hike across grassy terrain; 300 metre sea passage and steep scramble
Gear: Rainproof jackets, hiking boots, trail runners, rope, helmet — provided by Iain Miller, of Unique Ascent (for prices, visit uniqueascent.ie)
Fitness levels: Good, but talk to Miller before you do anything
Never take chances: Always take a guide with you to uncompromising, potentially dangerous places